Capital Marine Modellers' Guild will meet on Tuesday May 3, 2022 at 7 p.m., at the Nepean Museum, 16 Rowley Avenue, Nepean. This will be the second face to face meeting since the pandemic put us into Zoom status. As well it will be our last meeting of the season. Enjoy your summer.

Information here is subject to change and may be updated within days of the May meeting. Check back before coming out.

The April meeting of Capital Marine Modellers' Guild will take place on Tuesday, April, 5, at the Nepean Museum,  16 Rowley Avenue at 7 p.m. Those who attend are asked to wear masks, please. 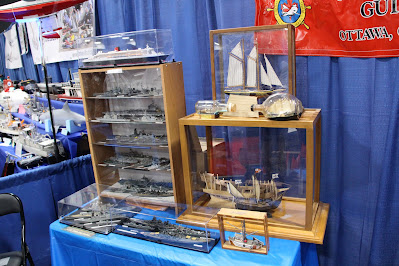 It is finally finished. The ghost ship sails away. All the wood work and sail work and rigging and even the forgotten archor are all done.
As I mentioned previously, there were no plans/instructions, and therefore all mast and boom and yard measurements are made up to look proportionately correct first against the hull, and then against the masts and remaining space.
Now it is time to get a parrot and a peg leg and set sail for the high seas.  Aargh...
John Clearwater 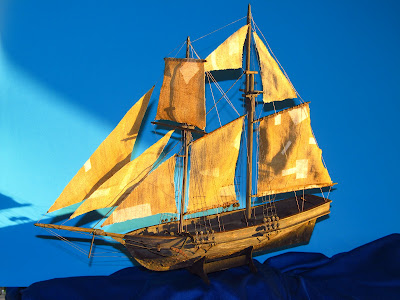 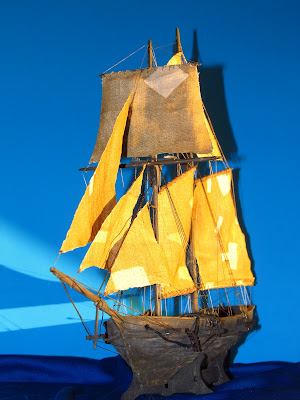 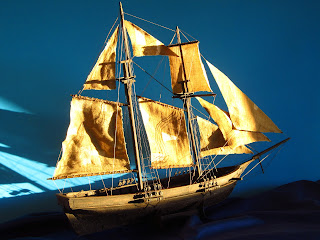 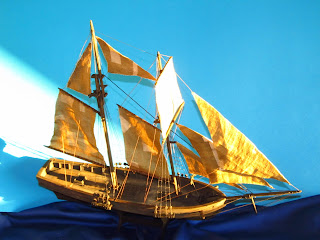 I have no name or even scale for this model. I bought it from AliExpress for a mere $12 shipping included. It arrived in two weeks. Today is day eleven (11) of the build. There are two basic problems: 1) there were no plans/instructions; and 2) the wood is plywood instead of solid single type wood. You can only bend plywood in one direction. So this has been a bit of a challenge. The goal here is to make a ghost ship or sort of disney pirates vessels with a lot of crud and dirt and aging. Hull crud is baking soda and crushed pencil shavings. The entire thing has been spray painted with a dirty black, then sanded down to show highlights.
John Clearwater 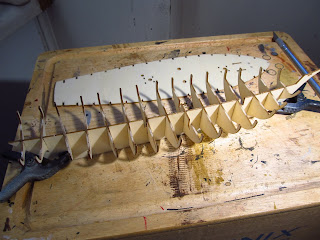 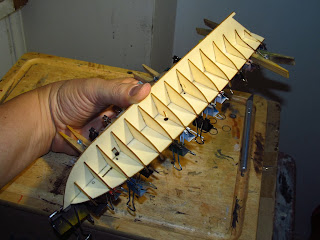 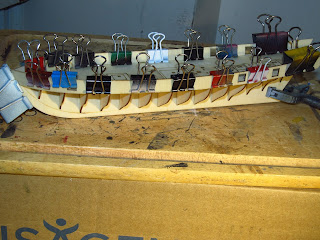 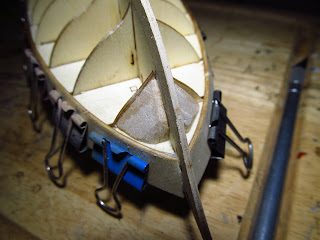 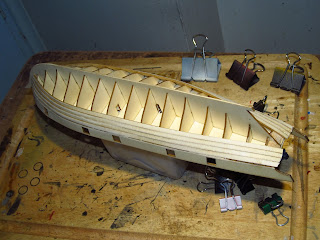 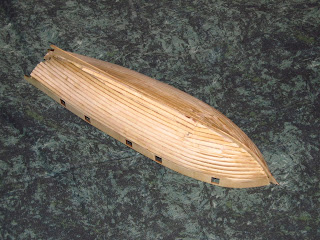 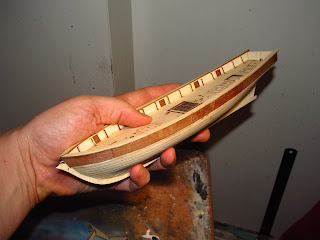 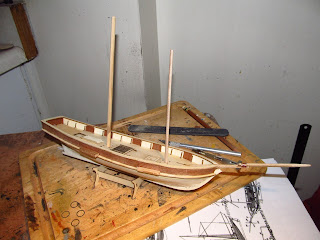 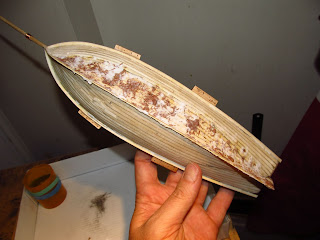 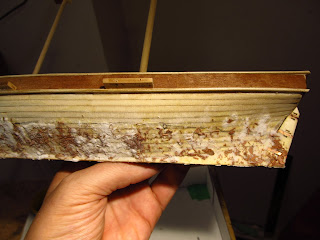 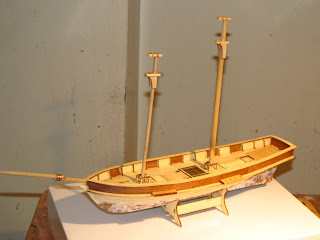 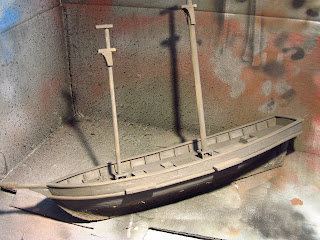 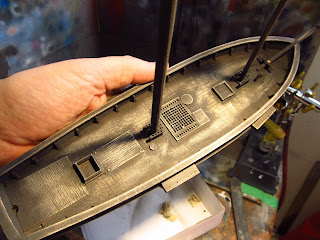 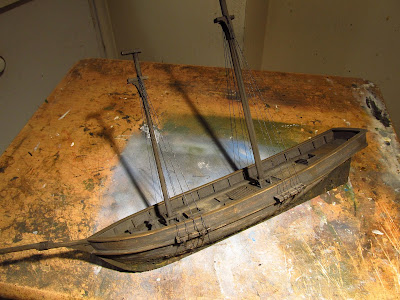 HMS Repulse and HMS Prince of Wales, in 1:700 scale

HMS Repulse and HMS Prince of Wales, in 1:700 scale, by Chris Flodberg. 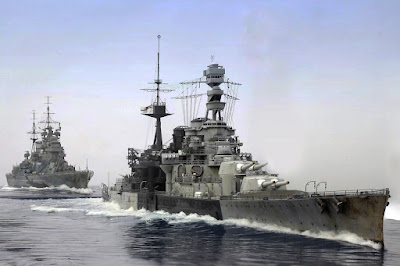 Russian naval cannon in about 1:25 scale from an unknown model company in China through AliExpress. The gun and fittings are metal and the carriage and base are wood. There is a selection of photo etch brass parts. I cut the base down from being a massive circle to something which will more easily fit in a cabinet. The instructions leave a lot to be desired. I started this kit maybe four years ago and abandoned it because of the two large metal sprue attachment points under the barrel which would show up in the finished model. I was unable to grind them off with a power tool so stopped work. Then last week I thought to just use a metal file, and within ten minutes the points were gone, so I sprayed it with Tamiya metal primer then a DIY store satin finish black. The imperial crest on the cannon is well done, and was brought out by sanding and scraping the paint away to reveal the goldish brass beneath. The water in the bucket is blue paint later covered with a drop of epoxy cement which dries like a layer of water.    John Clearwater 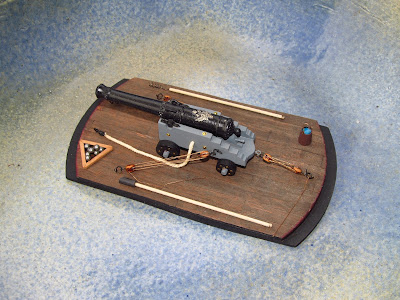 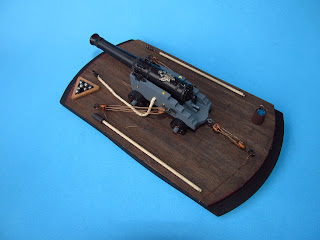 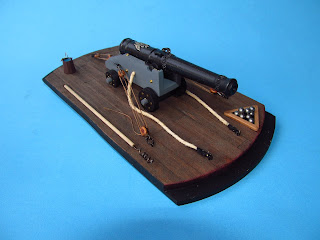 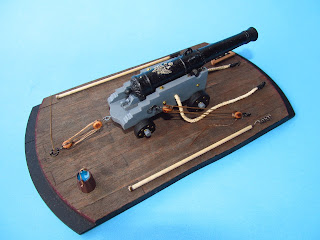 Cunard had Swan Hunter build this record-breaking ocean liner in 1906 as a twin with RMS Lusitania. Unlike the second ship, the RMS Mauretania (named after the Roman province of North-West Africa) served for 27 years, and held the Blue Riband speed record on the North Atlantic for 20 years with a speed of nearly 50 km/hr. It was the first ocean liner to utilize steam turbines instead of pistons to carry over 2160 passengers across the Atlantic in five days. It was the largest ship in the world until 1910.
This is the very old (1964) and very rough Airfix kit, and was part of a series of kits of British ocean liners. The whole build was an exercise in nostalgia, as I attempted to imagine myself as a small boy who received a paper-wrapped kit in about 1966 and proceeded to glue it all together and paint it from little pots of British Humbrol paints. It all went together in a week and was very much the fun model build of a child. Smoke is cotton wool with Vallejo soot powder.     John Clearwater

This site uses cookies from Google to deliver its services, to personalise ads and to analyse traffic. Information about your use of this site is shared with Google. By using this site, you agree to its use of cookies.Learn More 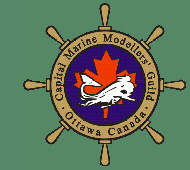 Days after completing this 1:50 scale rotating deck cannon I fell on it when I slipped in water in a parking lot. It took a couple of hours ... 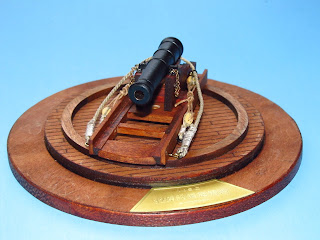 The Capital Marine Modellers' Guild is a social club for individuals interested in building model ships. It is located in Ottawa, Ontario, Canada. The club is informal and operates on a not for profit basis.

Meetings provide members with a place to talk about their interests and to share their knowledge of model ship building. Meetings are held on the first Tuesday of September, October, December, January, February, March, April and May at the Nepean Museum, 16 Rowley Ave at 7:00 p.m. New people are always welcome.

If you think the Capital Marine Modellers' Guild is for you, come out to a meeting and check it out.

The CMMG meets on the first Tuesday of each month from September to May at the Nepean Museum.

The location is:
Nepean Museum
16 Rowley Avenue at David Drive
Ottawa (Nepean), ON

The CMMG is open to anyone who can pay the annual fee to become a member. The fee is $20 per year. The public is invited to observe a meeting for free.

Note that this schedule is subject to change. As coming meetings are announced monthly, please, check with this site before going to a meeting.

The links below are to suppliers that members of CMMG mention frequently in their presentations. These suppliers have proved to be a source of tools and material useful for the hobby of ship model building.

Other Blogs of Interest

Countries That Have Visited This Blog 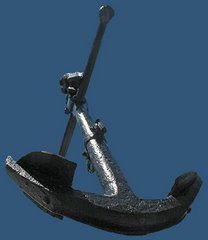